I write to inspire us all to embrace the personal development path leading to profound happiness and meaning.

Regardless of life conditions, this journey cannot help but produce a deeply joyful life. As it has mine.

I live in a condo on a tropical island, with a magnificent view out my front door to the east – a swimming pool, coconut palm groves, the ocean, and a nearby island. Gorgeous sunrises greet me 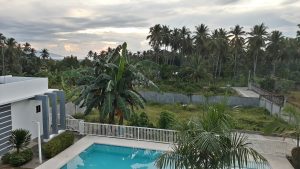 I wake early to meditate; usually greeting the sunrise. I take afternoon naps a couple days a week. I normally work out 3 times a week, and walk 15-20 miles per week to keep my physical body functioning well even as I age. In May and June 2019 I went to Spain to walk the Camino de Santiago – a 500 mile/800KM pilgrimage. 36 straight days of walking 20-25KM per day!

Most days, I have exactly zero stress in my life. I am blessed to have the resources I need to live a comfortable lifestyle, travel extensively, scuba dive in amazing places, and film awesome drone videos of beaches, waterfalls, and pure natural mountain streams. I characterize my lifestyle as ease, grace, and fun.

There’s no one in the world I’d rather be, no place I’d rather live, no other time of life. I imagine I’m one of the world’s happiest people; I envy no one. I wouldn’t trade a thing that has happened in my life, because each event – good and (particularly) bad – has been a learning experience; a step along the path that has brought me to this phenomenal daily experience of a vibrant life. 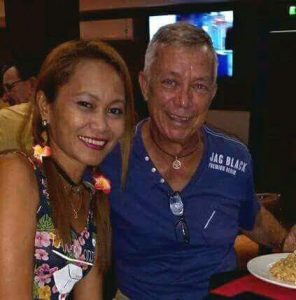 My partner, Joy, is the most incredibly wonderful woman I’ve ever had the pleasure to know. She’s fun, loving, caring, and wise beyond her years. She is an insightful mirror, and frequently the source of deep spiritual wisdom for me. I love, admire, and respect this woman beyond any capacity I’ve had in the past. Our feelings for one another seem to grow each day.

Joy practices yoga regularly. She attended a few classes, found her groove, then taught herself most of her advanced poses from Youtube videos. She has an interest in teaching yoga; and will likely to go to teacher’s training someday soon.

She grew up at the top of a mountain in the Philippines, and walked to and from school barefoot for two hours each way. She put on her shoes only once she arrived at school – so they didn’t get dirty. Consequently, she’s a natural hiker. I’ve hiked all over the world; but she can literally run circles around me – barefoot! Recently, she overnighted with two other women at the crest of a 6,200-foot-high mountain, having hiked for 6 hours earlier. (Way more treacherous a path than I’m willing to take on!)  She’s an amazing woman.

That’s the short version of my life today.

Was life always so amazing for me?

I was physically abused and essentially abandoned as a child. My father beat me regularly, taking out his inner anger and frustration on me. I missed receiving the loving attention from either parent that every child desires. So, I acted out to try to try to get them to notice me. It worked – though not in the way I had in mind. They had me picked up by the police on multiple occasions, and eventually incarcerated in two different institutions, because some child psychologist branded me as “incorrigible”.

I managed to escape adolescence with only minor outer scars and bruises (though the inner damage was a train wreck). At age 19 I found myself in jail – alongside some really scary people – for outrunning the police several times in my 1965 GTO. Fortunately, I was only jailed for a few weeks; and within a year I was able to land a job in the nascent computer industry, earning what seemed to a young man like a lot of money.

At age 22 I married a woman who I later realized was chronically depressed. I overlooked her dark moods while dating because she was physically attractive; and seemed to give me the love I desperately craved but never got from my mother. We went on to have two daughters together. When I divorced her after 6 years of marriage from frustration with her moodiness and its effect on me and my kids, she moved with my daughters to a location 300 miles away. The kids and I were devastated at being apart from one another; and a long period ensued where I’d drive or fly there every second weekend to visit with them. I have vivid memories of my first daughter sobbing uncontrollably when I left to go back to my home. During that long 5-hour drive I usually cried quite a bit, too.

I married again three years later, and soon after had a third daughter who became the apple of my eye. My new wife and baby daughter accompanied me on my weekend trips to see my other daughters. The girls grew quite close, and my wife seemed to love and care for them as her own. But I had no idea how to love a good woman, having never seen love modeled for me by my parents.

My career was on the fast path; and I threw myself into it – working long hours for years on end, a classic workaholic. I told myself my long hours were to better support my family as my income and responsibilities grew. That was partially true. But the deeper truth is, I was working 60-70 hours a week to avoid my own inadequacy at emotional intimacy with my wife and daughter. My wife complained frequently about my long hours away from home, and in her wisdom tried to get me to see what I was doing.

It didn’t work. I viewed her efforts as nagging, and believed she minimized my financial contribution to our marriage. I grew bored and exasperated with these ideas about her. Seventeen years after we were married (I was well into middle age at this point), I started an affair with a woman I lusted for, and eventually thought I loved. Before I had to make a choice of which woman to be with my wife and daughter found out about my affair. When they confronted me with it I lied and said it wasn’t true. Then they presented me with evidence they’d found on my computer.

I was crushed – particularly because my wife brought my daughter in on it; and both of them called me on my lies. I selfishly viewed it as an attempt to influence my daughter against me; and used it as an excuse to leave her to be with my lover. Soon after, she presented me with divorce papers. We went through a one-year period of trauma and drama while the divorce played out and our lawyers moved into new tax brackets. The eventual result was that she was awarded the bulk of our assets and a good part of my income; and my daughter essentially disowned me.

Though my lover and I had moved in together, I couldn’t be happy because of the profound shame and guilt I was carrying about having left my wife – who I knew to be a good woman overall; and trying to recover a relationship with my daughter. My paramour later left me for another man – another devastating emotional blow. I went into a deep depression, having lost everyone who was supposed to love me. About this time I lost my job as a result of a running conflict with my boss; and the job market looked bleak because of a growing recession.

Clearly, my life was not working. It was full of emotional pain, and it seemed like it might be better to just end it.

You’ve probably gotten the idea by now that I was a badly broken man with no concept of love of self or others; and no real moral values. That would be about accurate.

Naturally, I’m not proud of the man I was. But I needed to be brutally honest with you. Because whatever is your own life experience and state of mind, you’re probably no more damaged goods than I was. The many painful episodes at this stage of my life later became valuable learning experiences for me, in learning to forgive myself – thus moving toward greater self-love.

These painful events, and my brush with suicidal thoughts were significant emotional traumas that led me to believe that my life was terminally screwed and riddled with self-hate. All that I thought I knew about how to achieve success seemed to fail me. Rather than success, they led to greater failure and emotional pain.  I was ready to pull the plug on life; and every day I visualized how I might go about taking my own life.  Out of sheer desperation to survive I called my younger sister to explain my depression and seek her advice.

She suggested I try attending a 12-step group; which I did immediately. A member of that group guided me to a Unity church where I was fortunate to hear Marianne Williamson speak weekly about practical life lessons from A Course in Miracles. Through the Unity men’s group, I was initiated into The ManKind Project in 2001, followed by weekly circles of men supporting one another in deep emotional exploration, unpacking integrity and authenticity, and cultivating a life of service to the world via devotion to a personal mission of service.

Years of weekly emotional excavation led to an emergence of soul awareness, and a desire for mystical studies and experiences in meditation, metaphysics, tantra, shamanism, breathwork and movement. These led to greater awareness of our divine inner nature, and devotion to serving others through discovering, exploring and sharing my gifts.

I was fortunate to be invited to develop the internet infrastructure for the initial public roll-out of Focused Life-Force Energy in 2013. This life-enhancing service concentrates and focuses high-consciousness energy on homes, business and mobile phones throughout the world. It creates a high-consciousness field similar to the healing energy of revered temples, monasteries, and sacred pilgrimage sites throughout the world. It leads to expanded levels of consciousness for anyone exposed to the FLFE energy; as well as increased vitality, and enhanced function of the body’s immune system and a number of individual organs.

Being in the high consciousness space of FLFE since 2013 has undoubtedly accelerated my personal and spiritual growth since. My involvement with FLFE was the highest expression to date of positively influencing the world by giving my gifts.

An inner calling led me to separate from Focused Life-Force Energy in 2018, to allow me to concentrate on giving my gifts in a more personal and profound way. The Upgrade Your Lifestyle body of work represented by this website is the next expression of my life’s purpose. I intend it to become the most significant yet in service to the greater good of humanity.

I hope it’s crystal clear to you that if I can achieve deep self-love and gratitude; and an amazing, remarkable relationship and lifestyle after such a tortured past, then those are equally available to you. It’s my work to guide you to achieving the life of your dreams – whatever that may be for you.