Let’s say you were to contract a debilitating illness or physical capacity limitation as a result of an auto accident, stroke or other sudden event.

How would you respond? Would you adopt the attitude of a victor or a victim?

would be to seek to be at peace with the situation, and learn how to move forward from there. They would adopt a mindset to make the best of a bad situation – or, making lemonade from lemons. They might delve deeply into the best research about their illness, and search for the best recovery strategies.

Have you ever heard a cancer survivor say “my cancer was the best thing that ever happened to me”? That attitude is the outcome of an experience where the individual discovered that they had inner reserves of resilience and courage they hadn’t realized previously. They might have come to a realization that they could go toe-to-toe with death itself, and come away feeling uplifted by their winning outcome. And the knowledge they gained through their recovery process most likely has spilled over to other areas of their life; thus, optimizing their overall life experience.

One who feels victimized by such a situation adopts a “woe is me” attitude. They might dwell on their situation for hours, and flirt with depression.

Their illness might become their leading identity – i.e., they become their illness, and speak about it ad infinitum with anyone they think might lend a sympathetic ear. They might use their condition as the reason that they can’t – can’t have fun, can’t enjoy life, can’t commit to anything, can’t care for anyone else.

They might turn cynical – searching for people or groups they could view with disdain as perhaps a manner of feeling better about themselves.

The thing I find fascinating with this exercise in human nature is that the degree to which we appreciate our lives is simply an outcome of our thoughts and choices. How our attitude derives from the way we respond to our life experiences, particularly when we’re under duress.

Would you think that how one would react to a condition like this could likely be predicted by their attitude about life, prior to the situation occurring?

I suspect that we’re predisposed to either a victim or victor reaction based on our beliefs, values, and predominant thought forms.

What brought this topic to mind is a man I met recently.

This man had a stroke about 18 months ago. It left him largely incapacitated on one side of his body. He tried walking with a cane, but he fell a few times. So, rather than giving up and giving in, he hired his brother-in-law to accompany him when he exercises – which he still does 4-5 times per week. His brother-in-law holds onto his arm to steady him as he shuffles along slowly while walking on a path where I see him frequently. He helps him move from one exercise machine to the other in my gym. And he drives him from the gym to the coffee shop, where I finally took the opportunity to talk with him after seeing him exercising frequently.

He’s a fighter. He refuses to let his partial paralysis bring him down. He has hope that if he continues walking and exercising, he may someday regain some of his prior physical capacity. He stubbornly refuses to let his condition affect his appreciation of physical fitness.

What an inspiration he is to me!

As I was reflecting on his grit, another man I know came to mind. This man is at least 10 years younger than the fellow I just mentioned. He sustained a back injury from some repetitive work he had been doing a few years back. He’s been on disability ever since.

Suggest anything – seeing a chiropractor, walking around the block, doing some back stretches for instance, and he’ll respond with “I’ve tried everything. It’s a permanent disability, and there’s nothing I can do about it”.

So, most of his days consist of waking up in the morning, downing some painkillers, then making a comfortable place on the couch where he can spend the whole day watching TV, surfing the web and playing on Facebook. He takes his meals on the couch; and rarely gets up for anything but to relieve himself.

But twice a week he ventures out of the house on his motorbike to meet with a group of his friends. They meet on a beautiful beach, surrounded by their beautiful wives, and rant for an hour or two about things. The Muslims. The illegals. How silly women are for pursuing equality. What a disaster Obama was, and what a great president Trump is.

Then he goes back home and sits on his couch again.

So… back to my question. How would you respond?

If you’re not happy, it’s probably because you don’t do the things that happy people do.

Download ten of the best practices that lead to a happy lifestyle. Just leave your name and email address below, and it’s yours free! 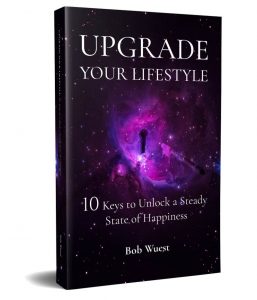