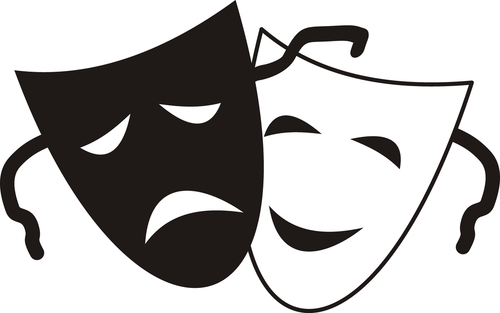 I use the term emotional drama to refer to two or more people interacting about what is usually an emotionally charged event. Drama has two different faces:

Emotional drama is rarely about reality. It’s never fact-based; else it wouldn’t be called emotional drama. Facts can be discussed and resolved logically, without much involvement of emotions. Emotionally mature people can usually easily resolve even emotionally charged interactions with authentic conversation.

Emotionally immature people, though, may prefer drama to resolution.

Able and Baker developed a piece of software together. Baker uncovers a problem with how the software is performing, and approaches Able with the intention of cooperating to debug it; and get it working properly. Unfortunately, Able interprets Baker’s words as blaming him for the problem; and is hurt by the exchange. It may have been that Baker was insensitive in the way he approached Able; or it might be that Able was overly sensitive. No matter. Either way, Able takes offense.

Note that emotionally immature Able has made up a story that Baker was blaming him – when that was not at all Baker’s intent. But the story Able made up becomes his reality. The reality of the situation – the actual words exchanged – are forgotten. All that remains in Able’s mind is the story.

Later that day, Able is chatting with a few friends and brings up the interaction. Able is expressing his outrage or frustration about being blamed for the problem; and seeking sympathetic comments from his/her friends. He is likely not seeking feedback on how valid his story is; nor an alternative way to perceive what happened. By re-hashing it with friends, Able is placing himself deeper in the victim role, and Baker in the role of perpetrator. He is validating, and adding energy to his hurt feelings. And, he is seeking a sympathetic reaction from his friends rather than resolution. That’s drama.

The example scenario here is work-related. But emotional drama plays out in relationships of all sorts.

Cultivating self-awareness is the means to avoid drama.

If Able were self-aware he might notice that he had an emotional charge from the interaction with Baker. He might realize that it’s his emotional reaction; rather than “he made me feel hurt”. He might understand that no one can make him feel anything; that all feelings have only one owner – himself. But if Able has ignored his emotions like society pretty much guides us, he’ll rarely even notice when his emotions are triggered.

“All suffering derives from arguing with reality” ~ Byron Katie

Suffering equates to negative emotions and stories made up about an interaction. The actual words and actions during the interaction are the reality. Anything beyond that is either thoughts (i.e., made-up stories) or emotions. When we make ourselves or someone else wrong because of an interaction, we’re arguing with reality – what actually occurred.

So, the primary way to avoid drama in the first place is to become more aware of the stories and emotions we’re creating from an interaction. And then bring those thoughts and emotions into a discussion with the other person, to resolve it. We might notice our reactions in real time, or it might take some reflection after the fact to come to greater awareness of them. Either way – until we have that discussion, we’re likely to continue carrying our negative emotions and judgments about our perpetrator around with us. Emotional maturity requires that we address and resolve the issue with the other – rather than holding on to it.

The second “face” of drama is sharing our thoughts and emotions with others to seek sympathy. This frequently stems from personal insecurity. We feel hurt, and we want others to validate our hurt feelings. We want acknowledgement that we were justified in feeling hurt.

Able’s drama is a burden to his friends. They might accept that that’s who Able is. But if he brings his drama to his friends repeatedly, he might just find he has fewer friends. Able’s drama literally sucks the energy out of his friends. How could it be otherwise? He is feeling victimized and low on resources. Victims are notorious energy vampires.

Want to join the discussion?
Feel free to contribute!

Training for the Camino
Scroll to top